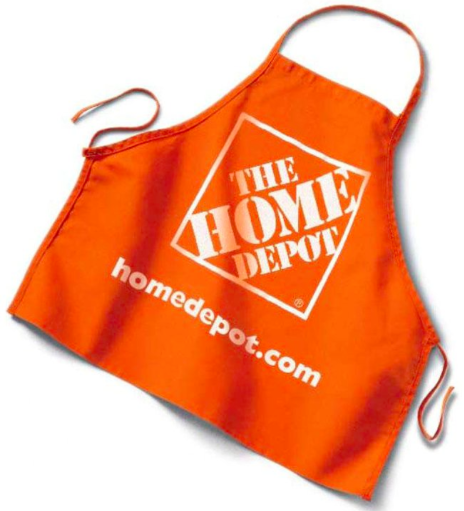 If you own a home, chances are you are a frequent visitor to a local Home Depot store. Some of us even remember fixing up our first little home, when we practically lived in the Paint and Hardware aisles of the home improvement mega store. But no matter whether you're a weekend DIY warrior or a professional contractor, here are some interesting facts about the world's biggest hardware store:

2. It’s also been our fastest growing retailer, surpassing the expansion of Target, Best Buy, and even Wal-Mart.

3. Home Depots operate out of huge warehouse-style buildings, with floor plans averaging 105,000 square feet and offering just about everything a construction project needs, from the biggest builder to the DIY weekend warrior.

5. The company was founded in 1978 by Arthur Blank, Ron Brill, Pat Farrah, and Bernard Marcus. Their original goal was to build superstores far bigger than any of their competition, which provided good prices based on volume purchasing and offered excellent customer service. Some would argue the latter!

7. Every year, Home Depot totals about $90 billion in sales on average, with ¾ of that coming from retail sales. It’s a permanent fixture on the Fortune 500 list of biggest companies in America.

8. Throughout the 1990s and 2000’s, Home Depot has frequently amended its company slogan. Since 2009 it’s been “More saving. More doing” which replaced "You can do it. We can help,” the slogan since 2003. Other past slogans include "The Home Depot, Low prices are just the beginning", "When you're at the Home Depot, You'll feel right at home", and "The Home Depot: First In Home Improvement!"

9. Home Depot now dominates the online construction and home improvement market as well, with at least 120 million visitors to their site every year.

10. Home Depot has the most employees who are Olympians and Olympic medal winners of any company in the world.

11. The company is active in politics, with 72% of their campaign contributions going to Republican candidates in past elections. Former Home Depot CEO Bob Nardelli was a personal friend of U.S. President George W. Bush and made the maximum allowable contribution to his campaign.

12. The Home Depot is a huge advocate of athletics on every level. NASCAR driver Tony Stewart pilots the Home Depot car and they support Joe Gibbs Racing. The Home Depot also have supported the U.S. and Canadian Olympic teams and co-founder Arthur Blank owns the Atlanta Falcons

13. You can buy some strange things in Home Depot, including a Remington heat clip set for hair extensions, a brownie making machine, a children’s’ potty training kit, pink Flamingo statues, a $600 Viking corded phone, and a jerky gun to turn your dried meats into jerky sticks.

14. The Home Depot has long flirted with an international presence. It has 180 stores in Canada in every territory and employs 35,000 people there. It also has 11,000 employees in 106 stores in Mexico with an annual 10% growth rate. At one time they also expanded to Chile and Argentina, though those experiments soon were pulled back.

15. Looking to cash in on the prosperity and real estate boom in China, they opened 7 stores, but closed those in 2012 because of fledging sales. Apparently it was a cultural difference that precipitated the failure, as Chinese shunned Home Depot’s “Do-It-Yourself” philosophy. In China, manual labor is considered for commoners or lower class, and the Chinese who could afford Home Depot wanted completed design and remodel projects, not step-by-step help and tools. A representative of Home Depot said it best in an interview with the Wall Street Journal: "The market trend says this is more of a do-it-for-me culture.”

16. Despite their international setbacks, Home Depot is still considering expansion to the UK, Ireland, and Poland.

17.Despite the success of their super stores, Home Depot has had plenty of failed business experiments, too. They opened several convenience stores and fueling stations aimed to attract contractors, builder based HD Supply, and a line of home furnishings, landscaping suppliers, and an EXPO appliance design center

18. In a gruesome scene that played like something out of a zombie movie, a man once walked into a Home Depot in California, grabbed a sheet rock saw, and started sawing his own arm off. A police officer in the store immediately applied first aid, saving his life. No one knew why he did it though it was thought he was in some sort of drug-crazed episode.

19. The real estate market crash of 2008 hit Home Depot particularly hard, as they had to close 54 stores nationwide and lay off thousands of employees. In 2008 and 2009, their sales were down approximately $20 billion from their peak.

20. The company is deeply invested in philanthropic causes. The Home Depot Foundation, the charity wing of the corporation, has donated over $200 million in contributions, materials, and time to organizations like Habitat for Humanity, California-based City of Hope National Medical Center, and KaBOOM!, who builds playgrounds in inner cities.

21. Home Depot has a good track record of supporting U.S. military veterans, and offers an ongoing 10% discount to our military community.

22. Inexplicably, Home Depot employees are still not unionized. In 2004, workers at a Detroit store voted down a proposal to garner union representation, which would have made them the first store to do so.

23. In 2014, Home Depot suffered a massive security breach of its customers’ financial data and other records. The damage was discovered to include about 56 million credit card numbers of its customers. To make amends, Home Depot offered a free year of credit monitoring to those affected and revamped their electronic payment systems.

25. Home Depot reports that they are environmental conscious, committed "to the environment and pledge to continue to be an industry leader in looking for products and services that are respectful of our world”. While it’s been criticized for not doing nearly enough to promote responsible building, lumber, and chemical waste initiatives, Home Depot has introduced a environmentally-safe label for 3,000 of its products and pushes for recycling and cleaner-energy lighting. The Home Depot Foundation pledged $100 million over the next decade to build 10,000 green affordable home units and plant at least 3,000,000 trees.
Posted by Unknown at 8:59 AM