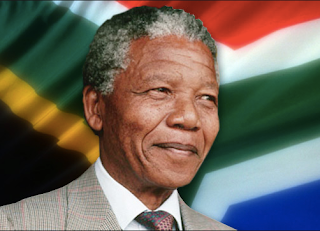 In 2009, the United Nations named Mandela’s birthday on July 18th to be Nelson Mandela International Day. On that day, the world community is asked to spend 67 minutes doing something good for others, representing the 67 years Mandela struggled for progress and freedom for South Africans.

2.         He served as president only one term, voluntarily stepping down in 1999 to ensure the new democratic process worked. Thabo Mvuyelwa Mbeki was sworn in as Mandela’s predecessor in June 1999.

3.         His name and life’s work are synonymous with the fight to end the Apartheid system of government and racial segregation in South Africa.

4.         He was successful doing just that, and is still considered the Father of modern South Africa for his role in toppling the oppressive Apartheid government and ensuring democracy.

5.         For his contributions to South Africa, civil rights, and humanity, Nelson Mandela was awarded the Nobel Peace Prize in 1993.

6.         He’s also received more than 250 awards and honors from countries and organizations all over the world, including honorary degrees from more than 50 universities and colleges around the world, the distinction of becoming the first living person to be made an honorary Canadian citizen, and the last person awarded the Lenin Peace Prize from the USSR.

7.         His birth name was actually Rolihlahla, a name meaning, “pulling the branch of a tree or a troublemaker” in the Xhosa tribe he belonged to.

8.         The name “Nelson” was given to him by a teacher on his first day of elementary school, as it was often the custom of the day for educators to give proper English names that was easy for them to pronounce to replace their tribal birth names.

Mandela grew up in a small village in the South African countryside, where his father served as a counselor to tribal chiefs. However, his father passed away when Nelson was only 9, and the boy was adopted by a Thembu tribal regent, Chief Jongintaba Dalindyebo.

9.         Not only was Mandela the first person in his family to attend school, he went on to study law at university and became one of the first black attorneys in South Africa.

10.       In 1952, Nelson Mandela, along with his friend Oliver Tambo, opened the first black-run law firm in South Africa, providing affordable or often free legal service for their black countrymen who had broken Apartheid laws. In his autobiography, Long Walk to Freedom, Mandela recalls, "I realized quickly what Mandela and Tambo meant to ordinary Africans. It was a place where they could come and find a sympathetic ear and a competent ally, a place where they would not be either turned away or cheated, a place where they might actually feel proud to be represented by men of their own skin color."

11.       Seeing the injustice and state-sponsored racial discrimination that plagued his country, Mandela soon went into politics. In the 1950s, he was elected to lead the youth wing of the Africa National Congress (ANC) liberation movement that opposed the government.

13.       In response, Nelson Mandela co-founded a secret military resistance movement called the "Spear of the Nation" or MK, in 1961, that advocated a campaign of sabotage against the government. This was a radical change of philosophy from the nonviolent demonstrations and peaceful protests he’d engaged in previously.

14.       Mandela soon became the most wanted man by the government, and resorted to subterfuge to evade capture and keep working. Often disguising himself as a fieldworker, a chauffeur, chef, or other common worker, he was nicknamed the Black Pimpernel for his crafty elusiveness. "I became a creature of the night,” wrote Mandela in Long Walk to Freedom. “I would keep to my hideout during the day, and would emerge to do my work when it became dark,"

15.       In fact, he was dressed as a chauffer when the police finally captured him in 1962, as he drove fellow activist Cecil Williams through a small town called Cedara. Mandela later said, “I knew in that instant that my life on the run was over with other ANC leaders of sabotage."

16.       Almost everyone expected Mandela to be sentenced to death for his crimes, as he was considered a terrorist by the government. During the trial and sentencing, Mandela gave an impassioned speech, explaining that he was more than ready and willing to die for his cause. The speech was published in local newspapers and media as, I Am Prepared to Die, and ironically saved his life when it brought national attention and some sympathy to his plight. Instead of death, Nelson Mandela was sentence to life in prison for treason and conspiracy, along with seven of his cohorts.

18.       During his decades in prison, South Africa’s struggle to throw off the yoke of Apartheid became an international cause célèbre, with Mandela the worldwide symbol of that cause.

19.       Mandela actually had a chance to gain his freedom in 1985, when South African President P.W. Botha, facing mounting political and international pressure, offered to release Mandela immediately and recant his sentence if he only would publically deride armed opposition.

20.       Mandela refused on principle, saying, "What freedom am I being offered while the organization of the people remains banned? Only free men can negotiate. A prisoner cannot enter into contracts." He voluntarily stayed in prison and served 5 more years.

***
Look for part two of this blog next week, when we cover the final 15 facts about Nelson Mandela.
Posted by Unknown at 5:33 PM